I'm nearly at the end of my Trek, only one week left and the game should be done in the timeframe. This week I've been working on the bottom part of the screen writing the special moves. If Goobert gets stuck then you can collect up the banoffe pie and give it to him as a treat, then he becomes unstuck. 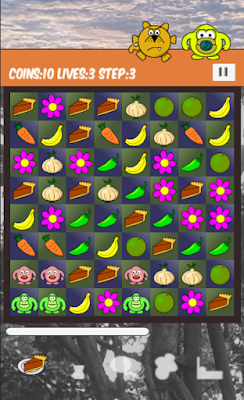 The rest of this week was mainly spent exploring beaches. A pretty good week. 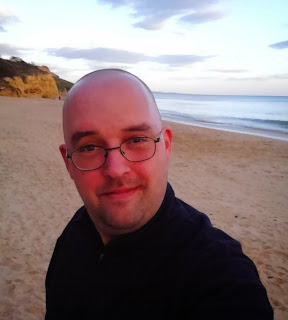 I've mainly been working on the animations this week, this is what the end of level animation looks like.

The Goorilla family holding hands ready to move on to the next step of their journey was a suggestion from Rich after reading this blog, so thanks for that. Goobriella has had a few tweeks also as a result of feedback, so I'm glad I've done this blog. All of the Goorillas are on to their third iteration and hopefully that is enough for the first release of the game.

I have met several nice people on this trek who have taken an interest in what I'm doing and given constructive criticism. For example yesterday I was in a restaurant waiting for my dinner so I thought I'd do a bit of animation to fill the time. The waiters were chuckling as they were standing behind me whilst I was working. I explained I was on this DevTrek and they took a look at the animations I was working on. They mostly liked my animations and laughed a few times, which was really uplifting for me because this is my first go at it. They didn't really like the splat animation though, so that is good to know. I'll have another go at that tomorrow.

Next week is almost the end of this DevTrek. I've got a few more places to see and plenty of development to keep me busy.
Posted by Goorillas at 2:22:00 PM No comments:

I've spent quite a lot of time on the road this week, so the trek part has been good. I'm roughly in the middle of the country and am heading south tomorrow.

Sticking with an agile inspired development routine, here is what the game looks like this week. I've mainly been coding, and started working out the levels.

At the end of week 4 I've got a basic matching game developed, that was a good exercise to get a better understanding of Unity, ready to start making the game work the way I've designed. In the video below you can see Goobert stretching over 2 tiles.

To develop the stories for each character I started looking at the drawings and a few things sprung to mind. Googar only has one tooth for example because he is about six years old and that's why he's always up to mischief. Goobriella rarely gets stuck, except when Googar is up to his antics. Gooby is only small so he builds up to his first big stretch, a bit like his first day at school, and he learns not to splat without his dummy.

Googar is part of the Goorilla family because they are nice creatures. They are small and a bit timid and when they get scared, they splat. If they splat then given a bit of time, they pull themselves back together.

Thinking about these creatures now and their short journey through the strange land, reminded me a bit of little blue penguins that dash across a beach. They almost make it to the other side, then one gets scared and they all run back. It is quite a funny thing to see them running backwards and forwards before they finally make it. So I'm going to try that idea in this game, instead of focusing on score and levels, it will be about getting the Goorillas to the next step of their journey.

I've tuned my initial design and taken out the concentration element, because it doesn't suit the characters or this game-play, it also reflects earlier feedback. Maybe I'll come back to that idea in a future game. 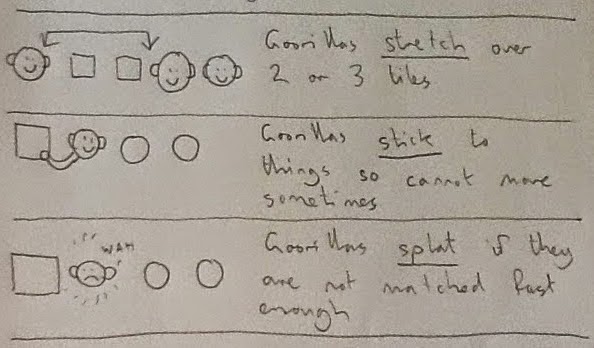 I can answer my questions from last week about what should fall down for sure now. I hope this game will be different, maybe even zany!