I've made a few adjustments to Goobriella, a bit of a makeover and any feedback would be appreciated. I've stopped tweaking the graphics for now and will see how the prototype goes. I'm looking forward to doing the animations soon, but I have a bit of code to write before I can get to that. 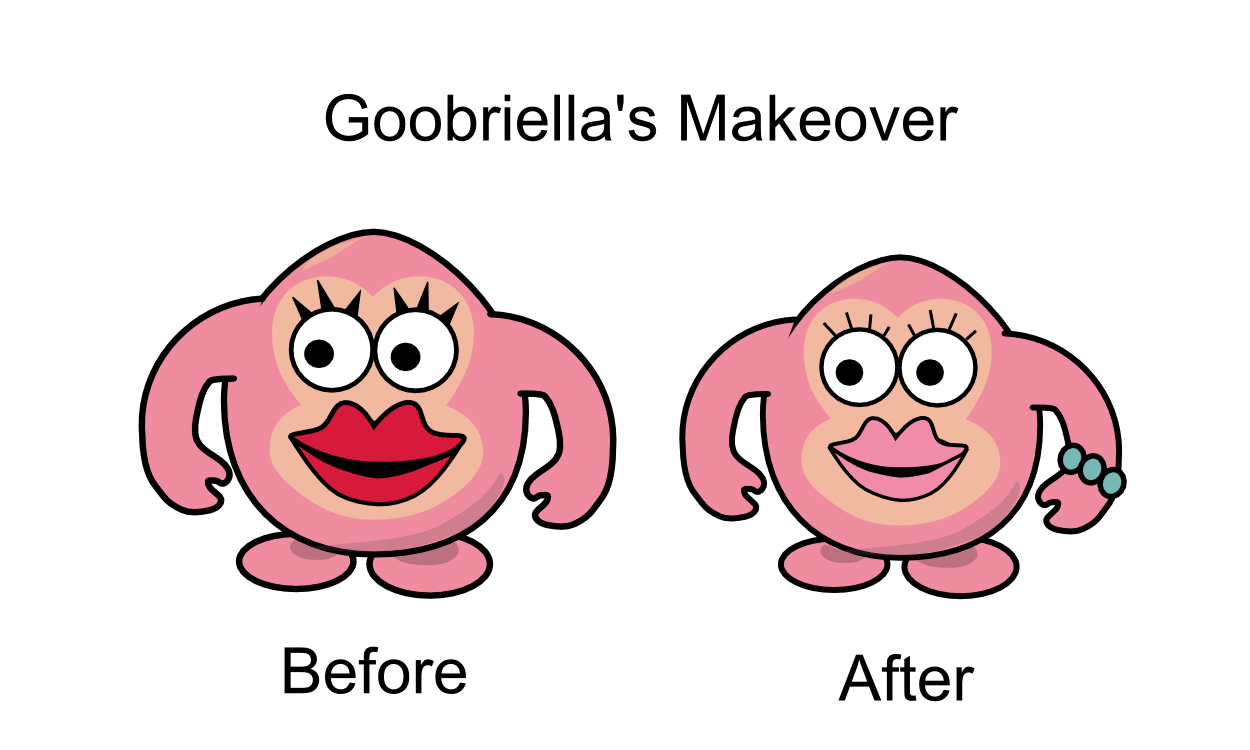 Doing my own play testing yesterday I thought, this game is 'a bit different' :)

But where do I go from here? I'm stuck! What else should fall down, not just fruit and veg. There should be a reason for each thing, whatever it is, falling down.

Next week I'm going to do some brainstorming, bit tough on your own, so I will try to think about the Goorillas and their journey and come up with a few ideas for short stories for children. Then I may be able to answer my own question, and hopefully make this game 'different'. Not just a match 3 game that features Goorillas, but the Goorillas matching game.
Posted by Goorillas at 2:32:00 AM No comments:

This week I've done the first draft of Goobert's stretching movement. Goobert is the oldest and largest of the Goorillas. He can stretch the furthest but sometimes he gets stuck to things when he tries to squeeze his way through. So in this game he can stretch over more than one space to make a group of matching Gooberts.

I've used Unity's Mecanim for the animation and I've used the smooth step formula to ease the movement of the sprites, which now move when you swipe them.

Here's a video I made on my Android phone to show the movement and animation.


I'm trying to get regular feedback during this game development process. Luckily you meet people as you travel and, if someone seems interested in what I'm doing, I try to get their opinion of the development to date.

I've had a suggestion this week that there could be more variation in what you can match, so not just fruit and vegetables, which sounds good to me.
Posted by Goorillas at 10:23:00 AM No comments:

Email ThisBlogThis!Share to TwitterShare to FacebookShare to Pinterest
Labels: DevTrek

DevTrek Week 1 - Characters and Game Board

So the first week of the Goorillas game DevTrek has flown by. I've seen the sights, found a few nice restaurants and been on a decent walk everyday. At the same time I've done some work starting to build the game.

The first thing I did was finalise the characters for this game. Each character has their own attributes and motivations so they have their own story as well as being together on the journey to ShanGoori-La. That was a lot of fun to do.

The next thing I did was compare the Goorilla characters line up with characters from many cartoons and video games we all know and love. I've tried to make them stand out as something new.

Finally I made the game board and populated it with the assets, the characters and things a player can match in the game, like bananas and pineapples.

Here's a screenshot taken on my Android phone. 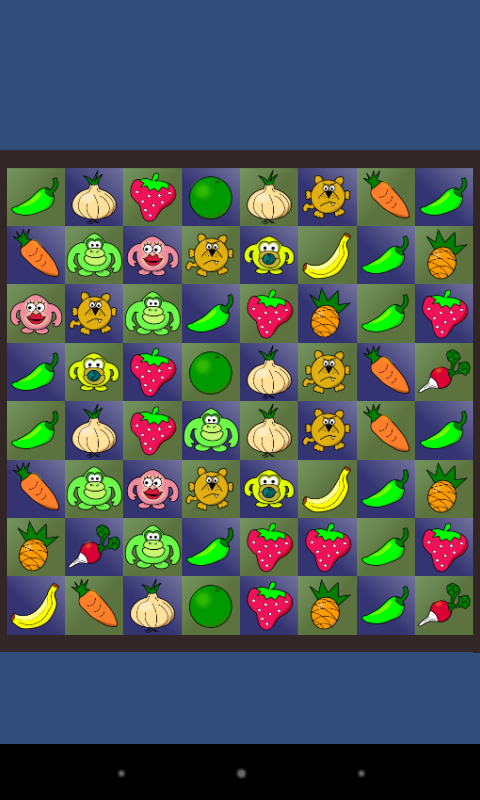 The graphics are pretty simple so they didn't take long to make. What has taken a while, and continues to do so, is the iterative process of 'look at it, decide what could be better, make the change, then look at it again'. I've spent ages looking at this screen asking myself questions like; 'Do the colours work together?', 'Is the banana thick enough?', 'Is the strawberry too big?'

The first time I liked the visual I took it outside to see what it looked like in daylight, then came back in with more changes in mind.

Any feedback about the characters, the other assets, colours etc. is appreciated.

For now I'm going to remember those questions, I'll ask them to potential players when the prototype is ready.
Posted by Goorillas at 12:53:00 PM No comments:

Goorillas are made out of goo. They can stretch and squeeze and sometimes they get stuck to things. Occasionally they splat! Goorillas come from the planet Goo where the laws of physics are sometimes different to our own, and there is just a little hint of magic about them.

Goobert is the dad, the oldest and largest of the Goorillas. He can stretch the furthest but sometimes he gets stuck to things when he tries to squeeze his way through.

Goobriella is the mom, she rarely splats as she likes to keep her cool.

Googar is a cougar made from goo. He follows the Goorillas around and is always up to mischief.

Gooby can't stretch as far as his dad yet as he is only little and he often splats.

Join the Goorillas on their journey to their new home in ShanGoori-La.
Posted by Goorillas at 9:19:00 AM No comments:

Happy New Year! I had a great Christmas break with my family and friends. Now I'm off on what I'm calling a DevTrek (Dev short for development and trek for a long journey).

I have a bit of time to spare between contracts so I plan to fill it doing things I enjoy like traveling somewhere new and doing something creative. These interests combine pretty well as I often find I'm a bit bored in the evenings when I travel, so developing a game makes good use of that time. I'll carry my laptop with me and do and hour here and there during the day most days also. I hope to be fairly productive and really enjoy the trek. There are also fewer distractions when you travel, so it is easier to focus on the task at hand. 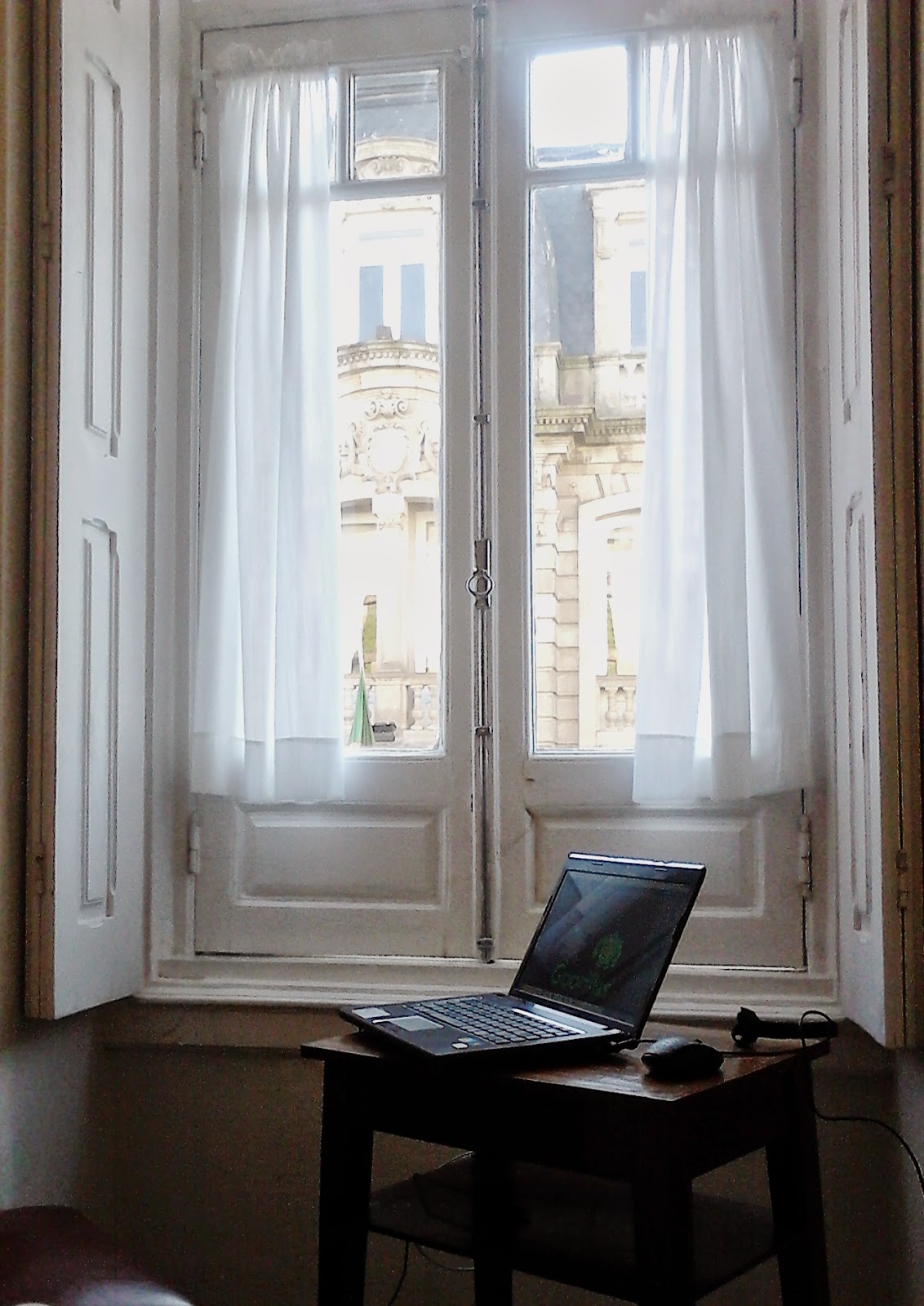 Before starting to develop this idea I bounced a few ideas around and asked people what they thought and "Goorillas are monkeys made of goo" got the best response. Over the break I've done a litmus test by getting a simple test animation in front of several potential players and received positive feedback and a few useful suggestions which I can think about before I really get going.

Also in my run up to this DevTrek, during my spare time, I've done a few art courses online, experimented with the technology, and done some research into trying to understand the craft of making a game.

Hopefully I'll create something that is fun and different, a bit zany.

Thanks for reading my blog, any comments or suggestions about the game are welcome via Facebook @Goorillas.
Posted by Goorillas at 5:13:00 AM No comments: